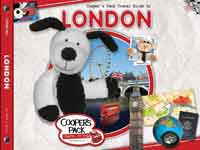 NEW YORK, NY – July 24, 2012– Cooper’s Pack Publishing – Children’s Travel Guides and Travel Books for Kids releases their 2nd Edition, London Travel Guide for Children available in eBook format, just in time for the London 2012 Olympic Games!   A perfect traveling companion for those attending the London Olympics, anyone who wants to follow along from home, or future travelers who want to learn about one of the world’s great cities.  The Cooper’s Pack London Travel Guide features over 500 pictures and noteworthy facts about London, all told through an engaging and entertaining story line.  Traveling stuffed animals have more fun, especially in London!

Cooper tours London with his new friend (and London hipster), L.L. (Little Lambie).  After a visit to Covent Garden and Somerset House, Cooper hits the London Eye, Big Ben, Buckingham Palace and many other sites. Lucky for Cooper, L.L. knows how to navigate the city by Tube, taxi, and train (not to mention walking).   The interactive eBook includes a multitude of buried bones (hidden secrets) that users can hunt out by clicking on areas within a page, along with advanced “fun fact” pop-ups with additional information and pictures.  Like all Cooper’s Pack books, there is also an educational and activity section highlighting everything you would want to know about London, especially if you are between the ages of 4-12.

Check out the eBook offerings for the iPad, iTouch and iPhone available on the Cooper’s Pack website at  https://cooperspack.com/store/interactive/london-interactive-travel-guide/ , or download directly on the iTunes App Marketplace at  http://itunes.apple.com/us/app/id543380097?mt=8 for $1.99 per book.

The website and series of books create a memorable and rewarding journey where kids can follow Cooper and his adventures around the world, highlighting the cities he visits and the friends he makes along the way. Cooper’s Pack has launched four children’s travel books featuring London, Seattle, New York City and Alaska.  Learn more about these great travel and gift books at www.cooperspack.com.
For more information visit the Cooper’s Pack website: www.cooperspack.com. Be sure to like our Facebook: http://www.facebook.com/CoopersPackTravelGuides. Follow us on Twitter: @CoopersPack. Interviews with Brandon Rudd, Cooper’s Pack Publishing are available!

The reviewers at Pit Stops for Kids recommend Cooper’s Pack Travel Guides for kids.  The full review can be read at http://pitstopsforkids.com/2012/06/coopers-pack-travel-guides-for-kids/ however here are a few highlights:

“I definitely recommend Cooper’s Pack for the purpose of educating children on their destination prior to departure, and to give them a fun but useful toy for the journey.”

Posted on June 28th, 2012 in Book Reviews, Cooper's Blog with Comments Off on Cooper featured in Conversations Magazine (June/July 2012 Issue)

Cooper’s Pack was featured in the June/July 2012 issue of Conversations Magazine.  We also had a corresponding radio interview that can be heard at https://cooperspack.com/2012/06/14/coopers-pack-on-conversations-live-with-cyrus-webb/

Posted on June 14th, 2012 in Cooper's Blog, TV Shows with Comments Off on Cooper’s Pack interview on Daytime TV show

Cooper’s Pack was interviewed by Cyrus Webb for Conversations Radio on May 31, 2012.  Webb welcomes Brandon Rudd of Cooper’s Pack to the show to discuss how the company is encouraging reading and the joy of discovery
through their products.
NOTE:  The interview begins 16 minutes into the radio broadcast.

Listen to internet radio with middayconversations on Blog Talk Radio
Page 3 of 7«12345...»Last »