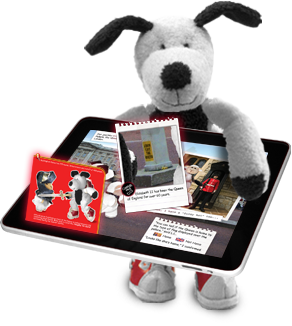 Cooper crosses the pond and lands in London, England.  Led by his travel guide L.L., the two head out to explore London’s sights and discover why London is one of the world’s greatest cities.

After landing at Heathrow Airport, Cooper and L.L. take the Heathrow Express into Paddington Station.  From there, they take a London taxi to Covent Garden where Cooper buys the world’s smallest kite.  The two walk towards the Thames and find themselves flying the kite in the courtyard of Somerset House.  No trip to London is complete without hitting the South Bank and the London Eye where they spot the Houses of Parliament and London’s famous Gherkin building.  L.L. later explains how Big Ben got its name then continue on to see Buckingham Palace.  Any visitor to London knows walking the city is key.  The two explore Trafalgar Square, Regents Street and Piccadilly Circus.  After a restful evening at L.L.’s flat, the two finish with tea and biscuits at the Tower of London

Throughout the London book, L.L. teaches Cooper about London’s history and things to look for when exploring the city.  The book also includes an activity section detailing London’s interesting facts, history and maps.  In addition, the London book contains a multitude of “buried bones” hidden throughout the book.  Touch a picture and see a zoomed in view with additional information and fun.  By combining the rich imagery used in the print version of the books with an interactive “Where’s Waldo” type feature to see what Cooper hid within the story, readers are guaranteed to enjoy their journey.

The Cooper’s Pack children’s travel guide series follows the journey of the main character Cooper, an adventurous dog, through the city with a local friend, a member of his “pack”. The books also include an interactive education and activity section and hidden secrets called “buried bones”.  See our other interactive eBooks featuring Cooper in New York City, Seattle and Alaska.