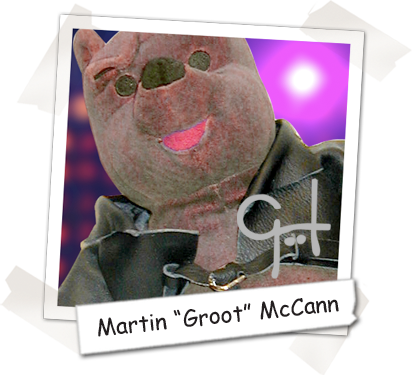 Martin McCann has been creating art since he could lift a crayon. At the age of 5 his first “big” project was drawing a map of the continental United States on the wall of his room, complete with highways and railroads. Although his desire to design and produce visual art was strong, the creative process was not limited to the two dimensions of the drawing board.

His other creative outlet was found in the kitchen where at the age of 6, on his own initiative, he took on the challenge of Shrimp Newburg. Thus the culinary arts would be Martin’s first professional creative career and would allow him opportunities in Minneapolis and Chicago, while on the way to New York City. He still exercises his cooking skills, experimenting and developing new recipes and prepares most of the food items which appear in the Cooper’s Pack books.

After years of creating art with real materials Martin decided it was time to learn how to do it virtually. In the early 1990’s he took on the newly introduced Photoshop, and since then has taken his mastery of digital graphic design and parlayed it into a variety of interesting projects including websites, logos, unique graphics, and of course, bringing Cooper to life in the pages of the Cooper’s Pack book series. His respect for learning has lead him to share his knowledge of the website design process as an adjunct college instructor (his idea of the ultimate hobby job).

Martin is an avid bike rider and enjoys touring along the coast of Puget Sound, especially Alki Beach in Seattle, WA where he resides. It should be noted that Martin chose to utilize the pen name Groot, which means “large” in Dutch, in appreciation of his favorite culture and larger-than-life size.